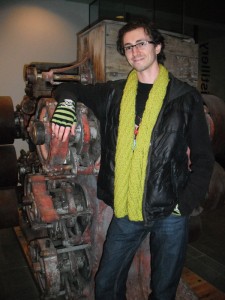 Today, I present to you my version of Suzie Blackman’s Staggered Rib Scarf. When I was at Michael’s during one of their yarn sales, I came across this particular shade of Bernat’s Softee Chunky yarn that was going to be perfect for my man. He confessed to me, when he picked up a pair of fingerless gloves striped with black and this particular shade of puky greenish-yellow in Camden market in London last June, his love for the colour. Additionally, I recently bought him a wicked magenta and black snowboarding jacket by Orage (from a few seasons ago – which meant it was heavily discounted – w007!), and figured this colour would work perfectly with the magenta shade in his jacket.

And, I was right. Remarkably, it also perfectly matches a tiny splash of that colour in his blue hat, which he wears everywhere in winter because it’s so warm (also pictured here). I do need to replace it, as it’s getting a little worn, but now I’m not certain what to do – the hat paired with the scarf look so good together, but then the blue doesn’t match the jacket, so… perhaps a black and green striped hat to match his fingerless gloves is in order. 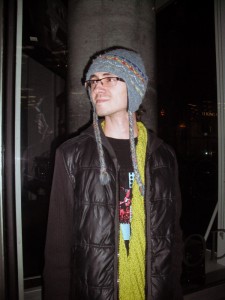 In any case, the project itself went pretty well. It took me approximately two weeks of knitting, mostly during class whilst listening to my profs lecture (I’ve discovered it’s a far better way of concentrating on what my teachers are saying – I find I have to keep busy during lecture, or else my mind wanders, causing me to miss half the content). I wrapped it up the night after Valentine’s Day, so in a sense, this is my late Valentine’s gift to him. He wore it for the first time last night, and my girlfriends very kindly complimented him on it 🙂

The only modification I made to the pattern was to add one extra set of stitches to make it slightly wider than the pattern originally called for. I figured this would be appropriate, as he’s so tall, and therefore probably larger than the average person (in bone structure, certainly not in girth – if anything, he’s barely heavier than I – which can be a source of some troubling self-criticism, on my worst of days).

The project page for this scarf is here, on Ravelry. 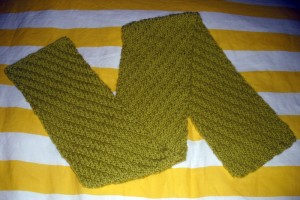 I did have one little issue with the yarn, however. I’m not certain how it came about, but for some reason there were chunks of dark brown, straight hair tightly woven around some parts of the yarn. That’s right – tightly woven *around* the yarn, not spun in with it. I was able to cut most of it off after the scarf was completed, very carefully with a pair of extremely sharp, small knitting scissors I won off a blog contest once. But the dark brown strands trouble me. What are they? Are they human hair, as I suspect? Why would human hair be wrapped around strands of factory-made yarn? It brings to mind the horrific stories from Fast Food Nation: The Dark Side of the All-American Meal

. My active imagination called up a story in which a woman working the yarn-spinning machines, loses the bun in her hair and some of it spills into the machine, being sucked in to wrap around the yarn at some stage during the process. But this is all my imagination – I have no idea how factory yarn is made, who operates the machines, where it’s made, whether hair can possibly fall in or be torn off someone’s scalp, or what… I suppose I would like to know where this yarn came from, or perhaps be reassured that that’s not what this was.

What do you think? Have you ever bought yarn that had something suspiciously like human hair wrapped around it? What did you do – return the yarn, contact the manufacturer, cut it off and ignore the questions I’m sure came to mind when you encountered this? Perhaps it’s a normal occurrence and this is merely my first experience with it. I simply don’t know.

Anyway, enough of my drama-inducing musings. The scarf looks great on my man, and the photos turned out nice too. Onward, to my next project!

One thought on “Another FO: Staggered Rib Scarf”