I think I need to start using this place as a way to track inspiration for projects. I spend so much time scouring Ravelry, looking for the perfect pattern for yarn I have in my stash, or things I really want to knit, it makes no sense unless I have a sort of “notebook” in which to record my finds, that I can come back to and consult with before proceeding with a new pattern.

Okay, with that out of the way, I’d like to mention something I saw today that I thought was brilliant. I keep seeing shops trying to sell their ruffle yarns, which I’ve found utterly gaudy and cheesey up until now. Mainly because, as scarves, they just look tacky, and with so many people wearing them, and seeing them in so many knit shop windows, I dunno… I just don’t really care for them. As appealing as the yarn itself looks in a skein… as a scarf, it’s just… meh. 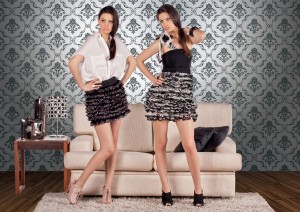 But today, I came across a Portuguese site that displays the yarn done up as a skirt – which I thought was quite interesting. While I don’t love pencil skirts, I do enjoy the look of this.

A quick Rav search came up with a couple of adorable children’s patterns using these yarns in a similar way, so I think I’ll be able to adapt one of those patterns… they’re cuter than the one pictured here, shorter, more… I don’t know what the word is. Just the shape I prefer for skirts.

Now, I’m tasked with finding the perfect ruffle yarn to make one of these… colour, weight, brand… hmm.