Christmas in Kemptville has been lovely this year. We got a large dump of snow right before Christmas, as I predicted to my mother who was worried up until late last week, as they hadn’t had any snow at all up until then. There’s literally close to 3 feet out there – I dug out the snowshoes and took ’em for a run today. The pile of dirt next to a large hole in the yard my father dug out earlier in the year, for a pond to be installed in the coming spring, served as a perfect hill to slide down! 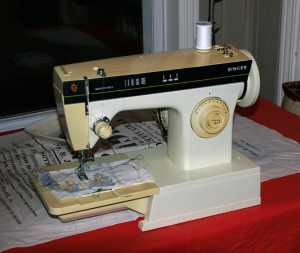 Christmas day itself was exciting as well – this year, mum bought me an old, used sewing machine! It’s a Singer, and only cost $30. I’m totally fine with having something simple to learn on, and am already furiously searching on Google for patterns for things I constantly search for on Etsy, and am looking forward to creating.

In keeping with my custom, I will review last year’s goals to see how well I fared:

And so, this coming year’s crafting goals:

One thought on “And a very Merry Christmas it was”